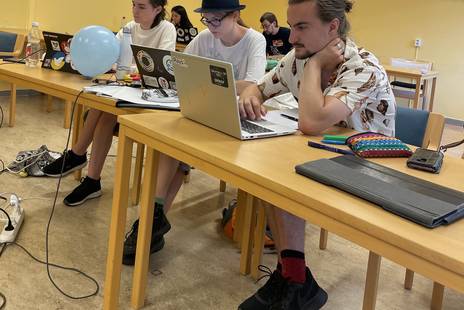 On Wednesday morning we woke up quite tired, since we had stayed up a little too late the night before. Therefore our breakfast took longer than expected and we had to rush over to the university in order to not be late for the contest which started at 09:30. After 25 minutes of speedwalking we arrived almost on time and started the contest.

The last task involved a magician who was performing a magic trick where he had to guess which card was pulled out of a deck with the help of his two assistants. I thought the task would be easier with less cards, so I spent a lot of time thinking about a solution using seven cards. It turns out that the task is impossible with seven cards (looking at the limits closely might’ve helped) and the solution still sounds like complete magic to me.

After 5 hours we headed downstairs to eat our lunch. It was a vegan salad which had a lot of interesting but very tasty ingredients such as hot pink hummus made from beets. Unfortunately I wasn’t a big fan of the dressing, since I didn’t mix it properly before pouring it onto my salad and I think I only got vinegar. The salad was still pretty good though.

After lunch we talked to the other participants about their solutions and we did some upsolving. About an hour later we then headed off to the beach.

When we got out of the bus we could already smell the sea and were excited to soon feel sand under our feet and jump into the water. From the beach you could also see the famous Øresund Bridge which we had crossed by train on Monday. The beach was fuller than I expected, but we still found a nice spot to settle down. The weather was perfect: it was warm but not too hot and there was a nice cool breeze. Since the water was quite cold, we decided to just run in as fast as possible. It was very fun and refreshing. After a lot of jumping up and down (to not get too cold), handstands and water fights, we decided to get out again.

We then held a long jump competition, since the sand provided the perfect landing strip. Unfortunately you couldn’t run very fast in the sand and you could easily trip. Then we decided to get some ice cream. Lucky for us there was a delicious ice cream booth right at the beach. It even sold chocolate, strawberry or caramel covered soft ice, to which we couldn’t say no to. Fabian was even able to get a ‘pannkaka’ and we were all very happy.

Next it was time to build a sandcastle. It should of course be as big and intricate as possible so we soon got to work. We built multiple different towers, entrances and even a Sandstofl. The finishing touch to this masterpiece was placing Stofl and Binna on top.

Unfortunately it was soon time to leave the beach and we started walking to the restaurant where we would eat our dinner. They had a wonderful menu in Swedish and we had a great time trying to read it. They had burgers and lots of other things, which I’m not quite sure what they were. The food was very good and they had nice music.

On the bus ride back we enjoyed the beautiful sunset and we tried to take some photos and videos of it, which wasn’t easy since the bus was shaky. After a long day we went to bed soon after arriving at the hotel.

On Thursday we once again rushed to the university since we took too long to eat breakfast and underestimated our walking speed. Luckily we only missed the first few minutes of the upsolving session and soon began implementing the tasks from yesterday’s contest. I unfortunately wasn’t very successful. I was trying to solve an interactive task, so after around 10 submissions which got compilation error I finally got my first WA. And everytime I thought I had found a sample where it failed at, it turned out that I’d just answered one of the queries wrong myself.

For lunch we went to this very fancy cafeteria, so I don’t think you can really call it one. It had great food and even a tap with sparkling water coming out of it.

After lunch we eagerly walked back to the university since it was time for the fun part of the day: A team contest! We split up into teams of three and had some heated debates about about our team name. Then it was time to start the NCPC contest. The rules were like at ICPC, so only one person was allowed to use the keyboard at once. We didn’t have any printers, but for debugging you were allowed to look at your code on your laptop. And we even had balloons!

It was quite overwhelming at the beginning since there were a lot of tasks, but we tried to spot the easier ones as fast as possible. Submitting was very stressful because the whole team would watch after you did. But if you got AC, you got a balloon and it felt very rewarding :) The team contest went pretty well and most of the tasks didn’t need very many tries to get accepted (except the initial 8 wrong attempts to the combinatorics task). It was overall a lot of fun.

We had some brief solution presentations, but decided that we should probably start heading out for dinner, because people were getting hungry. Our plan was to go grilling outside, so we first went to the supermarket to buy all the food and supplies we needed for the perfect grill party. We bought lots sausages, zucchini, halloumi cheese, marshmallows, some candy for desert and much more. Absolutely nothing could go wrong now.

Until we got a phone call 5 minutes later that all the grilling spots were filled. And during that phone call we felt the first drops of rain. We headed back to the hotel, to at least drop off some of our stuff and rethink our plans for the evening. When we got to the hotel it started pouring rain. There were two options now: Squeeze 21 people into one hotel room and try to grill/cook our food there, or grill in the rain (at least the grilling spots were free again). The second option sounded like a lot more fun so we put on our rain jackets, grabbed all of the umbrellas from the hotel lobby and made our way to the grilling spot.

Some people had to stand over the grill with an umbrella and a flashlight, while Nicole took care of the rest. She turned all of the sausages and made sure nothing got burnt. The food was actually surprisingly good for the fact that it mostly consisted of wet hotdog bread with a hotdog. Also someone had packed the hotdog bread at the bottom of the shopping bag so it was about 5mm thick. With the hotdogs we had our tasty zucchini and halloumi cheese. We even made chocolate covered bananas in the fire. The strong wind was also very good for our fire (but not so much for Simon’s umbrella). Towards the end we ate some of the marshmallows with melted chocolate and it tasted great. After seeing some lightning and finishing most of the food, we went back to the hotel again. Even though I was a bit sceptical at first, I would overall rate this grill party an 11/10. It’s a very unique experience and I would totally recommend it.

But when we arrived at the hotel we realised that our candy was missing! It had got lost in one of the bags, but even after looking through all of them, we couldn’t find it. It was getting late though, so we went to bed, hoping to find the candy the next day.