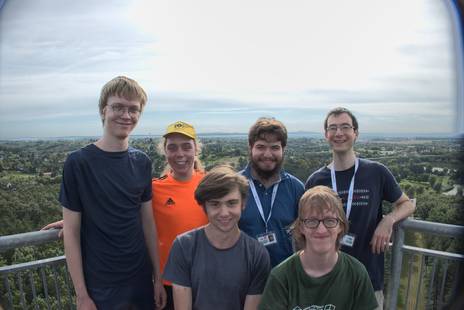 Despite all obstacles of this year, we were very lucky to be able to attend the Central European Olympiad in Informatics in Nagykanisza, Hungary, from 22-30 August. A total of 13 countries were competing, out of which 8 were able to make it to the on-site (5 were participating online).

The Swiss delegation consists of Joël Huber, Lukas Münzel, Tobias Feigenwinter and Jonas Meier, accompanied by the team leaders Johannes Kapfhammer and Timon Gehr. Below we write about our experiences at this event. 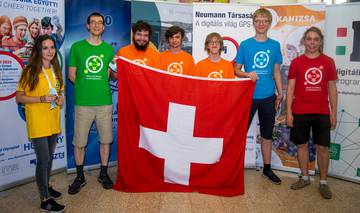 The Swiss delegation including the team leaders met up at Zürich HB, where we took a night train to Nagykanizsa. Arriving there on Sunday noon, we went to an escape room and were introduced to our guide for the week, Màrti. In the evening after the arrival of all delegations, there were some icebreakers, mainly consisting of quizzes and small games testing the dexterity of the participants. 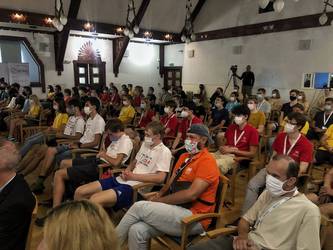 On the first morning in Nagykanizsa, we were woken up by the organizers at 7:20, even though we wouldn’t depart until 8:30. They kept knocking way too early for the whole week, but luckily there was the possibility to opt out. After breakfast, we had three hours of practice session to make sure everything would work on the contest day. There, we faced a small challenge with the mac keyboard layout: Pressing shift-space inserted a special character called non-breaking space which, despite its name, broke the program because the compiler only recognizes normal spaces. This particular keystroke was hard to avoid whenever a space followed some other keystoke involving the shift key. One common example is the addition operator, ‘+’. Luckily, we were able to solve this problem and did not encounter any others.

After lunch, there was some sightseeing. It involved finding codes at touristic locations. However, we could not learn that much about the city because the goal was to visit all places and return as fast as possible. This incident lead to the meme of doing everything competitively, even if it does not seem reasonable to do so. Thus started the invention of phrases such as competitive sightseeing (the Hungarian team won, and even received a price), competitive being late (we won), competitive losing participants (Martí won), competitive leaving the bus as well as competitive safety (don’t ask).

A bit later, the opening ceremony took place. There were multiple speakers, our favourite one discussing the question of whether to call us participants, lazy problem-solvers or influencers (he decided on the latter). Multiple groups demonstrated their skills in music, dancing and competitive ropeskipping.

After dinner, we were given an introduction in using stilts and in a traditional Hungarian form of martial arts involving a lot of punching and kicking, leading to the conspiracy that the organizers are trying to eliminate the competition by breaking their hands. Luckily unharmed, we went to bed early in order to be fit on the following day’s contest. 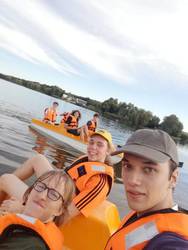 On Tuesday, the first contest took place. For the first time, we tried not to be late. Rather exceptional for a programming contest, it started on time. We helped counting rectangles in a “fancy fence”, tried to connect some roads and helped Captain Ágnes in her quest to win the competitive multidimensional planet-sightseeing. While the first task went quite good, we didn’t get many points on the second problem, because we don’t know geometry that well. And in the third task, confusing stuff is a thing (I say no more). Anyway, after the contest, we had lunch back in the school. After a very short analysis session, we went back to the hotel to change, since in the afternoon, sports at Lake Csónakázó was on the program. We did orienteering, cycling, and some of our team went on a dragonboat. The rest of the team (myself included) went on a pedalo, and whenever we met the polish or the slovakian pedalo on the lake, some people swapped boats.

Afterwards, we could try out some “traditional hungarian” weapons, namely throwing knifes, archery and whips. A dutch participant suggested that we could use them to eliminate the competition at the contest. We then decided not to execute the plan, mostly because we didn’t want to miss dinner when there was a grillparty on the program. 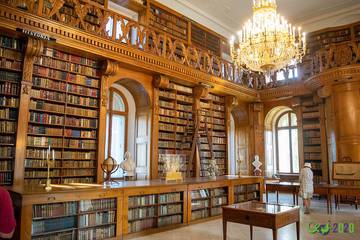 The library of the Festetics castle. 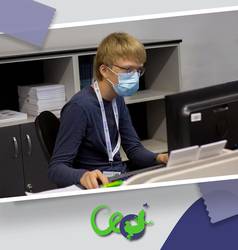 Lukas Münzel during the contest.

Thursday was the second contest day. I enjoyed the problems even though they were quite a bit harder than on the first contest day. I solved one task on paper, which made me pretty happy with what I achieved. Unfortunately, I was not able to implement my idea in code because I estimated my chances of implementing this data-structure correctly to be rather low, as I have never implemented it before. So my strategy was to just try to get as many sub-problems as possible. I lost some points because the time-limit was very tight and so the code had to be extremely optimized to get accepted. I had the impression that a lot of people were not used to this kind of issue, and it caused many points lost for otherwise correct solutions. But other than that, I am happy with my results, and it was great fun writing a contest in such an onsite setting. Throughout the whole week, we had a ton of excursions and events to attend, while this was fun, it was also a bit tiring and after an exhausting contest, we decided to skip the trip to the light-bulb factory, and decided to get ice cream and hang out in the city of Nagykanizsa. In the late afternoon, we visited the university and got to see, touch, and ask questions about VR-Systems, Robot-Football, and CNC-Like machines. For me, the most fascinating part was the 3D-Printers and small milling machines they showed us. Unfortunately, I was not allowed to take the big 3D-Printer with me. In the evening, we played card games with the German team in their room until about 23:00. 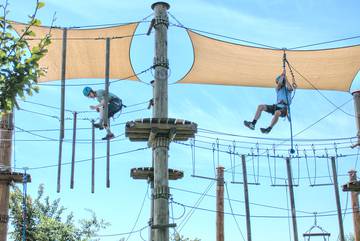 Tobias and Jonas on the climbing track at the Zobor adventure park. 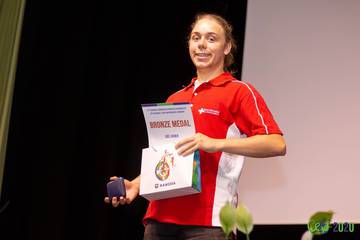 Joël receiving his Bronze medal at the closing ceremony.

Following the contest day, we started our way to an adventure park called Zobor Kalandozoo, which was about half an hour away from Nagykanizsa by car. The program there ranged from waterslides, laser tag and go-kart driving to shuriken throwing. Whilst playing laser tag, the dutch team joined in, for which the one dutch participant who jokingly said that he was now part of the Swiss team got a Toblerone. He seemed to appreciate the gesture and promptly gave me some dutch sweets, which tasted quite good.

Sadly all things have to come to an end and so the closing ceremony started. The medallists were announced and given their medals, various speeches were held by representatives of private as well as academic institutions as well as the government. From the swiss delegation, Joël Huber was able to win a bronze medal with an honourable 23rd of 55 places.

After playing volleyball and dart with part of the Hungarian delegation, the official program was concluded with small games, quizzes and finally a surprisingly fun and exhaustive dance game. It is, if I might add, quite an experience in enough itself to dance with the dutch team leader.

The official program ended with those dances and the participants returned to the hotel. Despite the absence of the said official program, the Swiss delegation joined the German delegation for various games, from codenames, exploding kittens and munchkin to card games such as Mao or lying. As one might guess by the fact that at least some of us decided stayed up the entire night (and the following morning), the game session was really fun and one of my highlights of the week.

In the morning, the participants arrived late at hotel central. They then had to wait for the team leaders, who had already gone back to bed after they had turned up in the lobby on time and had discovered that the participants were late. (Disclaimer: the author is a team leader.) 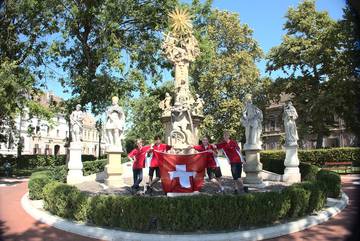 One last team photo at the trinity monument.

We then left hotel central for lunch. In the restaurant, Joël quickly located all dishes that contained garlic and among them picked “Pizza Yuhéijj!”. Everyone but Joël received the dish(es) they had ordered. We hypothesized that this was because nobody had ordered “Pizza Yuhéijj!” before and so the restaurant had previously been unable to properly debug their order processing.

When Joël pointed out the issue and finally received his “Pizza Yuhéijj!”, it turned out not to have a prominent garlic taste, so he only ate half of it. This allowed Johannes to catch up to Joël in a game of “competitive garlic eating”, where players have to optimize a peculiar utility function: Everyone sleeping in the same compartment of the night train prefers if nobody else has eaten garlic, but if somebody else has eaten garlic, then it is better to have eaten even more garlic yourself.

After lunch, we went to get some swag from the local tourist information booth. Then, we met with our guide Martí who invited us to another restaurant. We had some more drinks and pleasant discussions.

Time flew and it quickly was already time to leave. Gábor picked us up at hotel central and drove the team and our guide to the train station. Sadly, that is where we had to say goodbye. On the way home, we wrote this blog post documenting our lovely week at CEOI 2020 in Nagykanizsa, Hungary.

We changed trains in Budapest Kelenföld. As we stayed there for about two hours, we went to buy dinner in a local grocery store that Johannes found on his mobile phone with opening times on Saturdays until 10pm. As we were shopping, we deduced that the information was wrong and the store actually closes at 7pm. (Clues: The shopkeepers were shouting at us in Hungarian and trying to get us to pay and leave.) Unfortunately, this meant Joël lost his ability to purchase a sandwich and after our quest to find an open grocery store ultimately turned out to be a failure, he again had to settle for a serving of less-than-tasty pizza (_no_ garlic this time). We then almost missed our connecting train because the stairs escalated too quickly and also in the wrong direction.

On the night train, we connected to the SOI discord to socialize with other SOI organizers and participants. In a most unfortunate accident, Joël lost parts of his favourite fingernails. Later, Tobias did not find his shoes. As he did not want to go to the toilet in socks, he “borrowed” a set of shoes with elements belonging to Jonas and Timon. When we arrived in Zürich on Sunday morning (1.5 hours late due to bad weather), Stefanie was welcoming us with a bag of croissants.