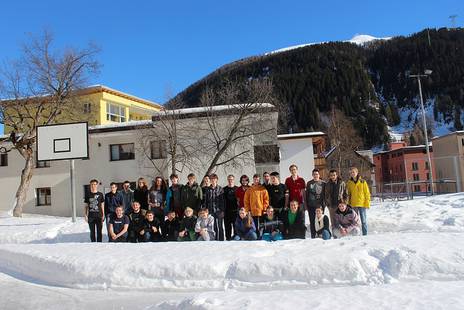 We spent the week from February 9 to 14 in our annual training camp in Davos. This year we were pleased to welcome the twenty three best-performing participants from this year’s first round as well as a guest delegation from Germany.

Once assembled in the snowy mountain resort, we started with a few introductory board games and trivia quizzes to get to know each other and had some introductory lectures to get to know the basics of competitive programming. Right after dinner some first programming challenges waited to be solved. Every night from seven to ten a practical contest took place. The participants tried to solve four IOI-style tasks in this short time or attempted to tackle at least some of them.

After a first night of little sleep we enjoyed a healthy breakfast at our accommodation, the ‚Youth Palace‘ in Davos Dorf. We took the Bus to our venue during the day: the Swiss alpine middle school in Davos (SAMD). We started each day with some theoretical warm-up tasks, that had to be solved and analyzed on paper.

During the morning a series of lectures was offered. The German leaders, the SOI organizers as well as guest lectureres from search.ch, Google and ETH Zurich explained useful skills and tricks for programming competitions as well as research and fun topics.

The afternoons were made at everyone’s free disposal - a perfect opportunity to deepen the knowledge acquired in the morning lectures or to go out and go skiing or snowboarding. After all that is what Davos is also famous for.

On Friday, the last day of the camp, a full five hour contest took place, the so called Davos I-Cup. In the end Julian Dörfler from Germany succeeded in getting 490 out of 500 points and got the gold medal. He was followed by Philip Wellnitz and Daniel Rutschmann who also got awarded an I-Cup glass medal. Finally everyone got awarded a book for their efforts and success throughout the week.

We concluded the camp with a last round of board games and some Bünder Nusstorte.

To the photo gallery