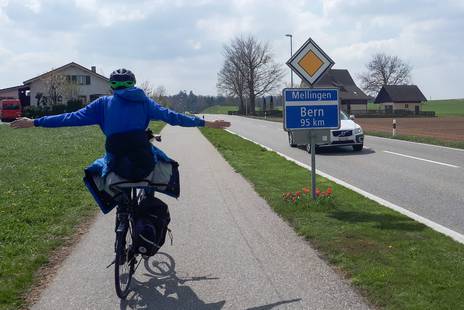 We tried to start our journey at 8:30. Ema was five minutes late but at least she told us a really funny story about her first class trip to Zurich. In short she travelled first class for the price of the second class and even got 6 francs refund. After the first twenty minutes of biking the first mishap occurred. Benjamin had flat tire, but luckily Fabian told us to bring a spare tire. Unfortunately, Benjamin did not. After one damaged finger, a wet shoe and one negative corona test, the rest of the group left Fabian and Benjamin behind in order to be on time for the Code Jam (Spoiler Alert: that did not work out very well). 20 minutes later Ema rode into Stefanie’s bike stand. Luckily nothing serious happened, however the bike stand is now unusable and in a great position for other people to comment on. So far, the bike trip was going amazingly, we even found a beautiful place by the river to enjoy our lunch and Timon’s muffins were delicious. Meanwhile Benjamin was fighting a dog and Fabian was repairing his tire. Don’t worry, Benjamin won 😊. 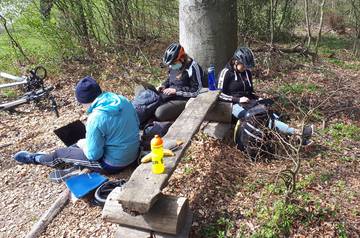 Ema, Stefanie and Elena (from left to right) competing for the code jam in a forest near Zofingen 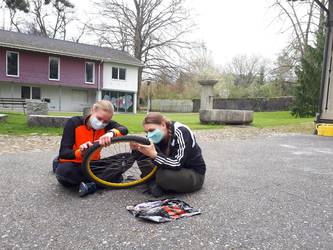 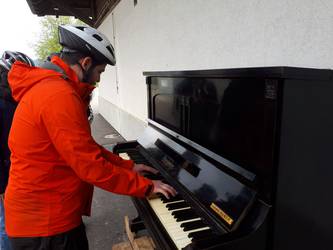 After lunch Stefanie fortunately knew in which direction we were supposed to go (and very proudly so) and we started the second part of our journey through the woods. The path started getting smaller and smaller and the roots of the trees were getting bigger and bigger, one mishap and we would have landed in the river. Soon enough, we realized this was not a biking path but nothing could stop us. We trod up the steep hill before finally giving in and checking Google Maps. Apparently we had taken a wrong turn shortly before our lunch break. Turns out that a “no horses allowed” sign was the replacement for our bike trail sign. Thanks to our choices we were able to enjoy the downhill part twice, but we noticed that time was running out. So Stefanie, Ema and Elena, who were going to write the Code Jam tried to sprint to Zofingen and left Vivienne and Timon behind. Meanwhile in Zofingen, Jasmin and Priska made bets as to when the first people would arrive at the Youth Hostel. After a very tiring bike ride for 30 minutes, we realized we had no chance in making it on time and looked for a cozy spot in the woods. Ema’s phone provided us with internet and we hoped our laptops would have enough battery for the whole contest. Our fingers were shaking from the cold but we kept going and soon after the rest of the group (Fabian and Benjamin had finally caught up) had arrived, Stefanie finished nearly all the tasks (don’t we love hidden subtasks?). The rest of the group was getting cold and decided to continue their journey leaving Timon behind to watch Elena and Ema finish the contest. Standing in the freezing cold, his only heat source was the gentle warmth of his overheating laptop running an infinite loop on each core. We finally arrived in the Youth Hostel and Stefanie organized a Fajita Party and we enjoyed our dinner after biking 75 km.

The plan in the next morning was to start biking at 9. At 10, Benjamin’s tire was finally fixed again, three more fingers were hurt and everyone was standing outside the Youth Hostel, ready to go. We had to make multiple stops at gas stations so Benjamin could pump his tire, but otherwise it was a smooth trip to our lunch destination in the middle of nowhere. But, they had a piano! It was very out of tune. But that didn’t stop Timon from playing Chopin’s Fantaisie Impromptu which led the angry neighbor to come out and shout “So, jetzt isch fertig! Suscht chumi übere.” (imagine a very thick Bernese Dialect). We also sang Bohemian Rapsody with Informatics lyrics which probably didn’t help lighten up his mood.

Then we continued our trip to Moosseedorf and Timon made a great deal with Fabian. Timon takes Fabian’s jacket and Fabian takes the heavy rucksack of Timon. Ema took the lead but went a bit too fast. Priska and Stefanie got left behind and found their own Moossee. The others watched the ducks and after Priska and Stefanie finally arrived there were some vivid discussions about how to get Benjamin into the lake and the height difference between Vivienne and Elena. But as we were getting cold, we continued our journey to Ittigen where Fabian lives. While he made us some delicious pancakes for dinner, Stefanie tried to hunt down the cat. We stayed a bit too long (maybe because we tried to convince Fabian to let us sleep over), so we had to hurry to the Youth Hostel in Bern to not be locked out for the night. Just on time we ripped the doors open of the Youth Hostel, nostrils flaring and checked in. Soon enough we had the pleasure of going into our rooms with bathroom and shower to finally relax after biking 150km from Zurich to Bern.