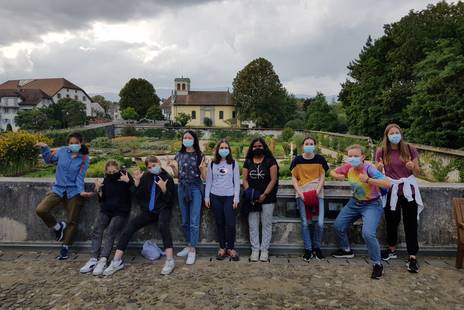 We got up at half past seven on Tuesday morning. The first full day of the informatics camp began with a hearty breakfast. The freshly made pancakes with Nutella and jam were particularly popular. Strengthened by the meal, we tackled the tasks on the SOI grader. At lunchtime there was spaghetti carbonara. The washing up was quickly done, and everyone had a short break. Unfortunately, a participant had to leave because she got sick. In the afternoon we continued to prepare for the Swiss Computer Science Olympiad. For dinner there were delicious dumplings with mushroom sauce and salad. Then we played cards and it turned out to be a cozy evening. Although we were tired, we went to bed quite late.

First thing in the morning, we had breakfast and after that we started training with our tummies pleasantly filled with pancakes and Nutella. After such a meal even the few ones who didn’t want to miss the kick-off of the first round of SOI at midnight, were wide awake and ready for a morning full of thinking. Due to the high level of focus, time flew by, and suddenly it was time for lunch. After a tasty risotto and some salad paired with passionate discussions, we embarked on our journey to Nyon. An uneventful train ride with nice sight and temporary uncertainty about the way, we found ourselves in front of the Musée nationale in Prangins. After a short insight into baroque lifestyle in a castle we dove directly into the exhibition about computer games. Most of the time was spent in the 80s with Mario, Pac Man and Rampage, though it is still disputed whether Pac Man or Mario won the tie break to the glory of best game. While we were occupied with Volleyball, Fajitas, Ligretto and some very difficult music quizzes the evening slowly faded into night.

The day started at 07:30 as usual. As the number of hours of sleep get smaller by the day, there weren’t that many people up at that time. But breakfast was of course still worth it. At the breakfast table we thought about a riddle from the SOI riddle cards (not sponsored) and eagerly debated about DAG paths and Toposort. After finding the solution, we decided to clean up and get ready for training.

Some of us worked on the first round tasks, while others continued solving tasks on the grader. We were also joined by a new participant, who could only participate remotely.

Lunch was delicious: Lasagne. Surprisingly, it wasn’t watery and was even vegetarian. We decided not to ask what was in it, just to make sure our opinions on its tastiness wouldn’t change. At the lunch table we had a heated discussion about chocolate yoghurt. Apparently, chocolate yoghurt is completely disgusting and very different to chocolate pudding or ice cream. There’s even scientific reasoning to this argument: The bacteria in the yoghurt is sour and doesn’t go with the taste of sweet chocolate. Most of us didn’t agree.

After lunch we played a few rounds of Ligretto, although some people would scream Griletto, Finisho, Lugano or even Burrito when they finished. It’s an incredibly chaotic game, but still very fun.

Soon it was time to start coding again. We spent lots of time thinking about and implementing first round tasks.

After a long day of programming we had our well deserved dinner. It was served by the kitchen newcomers Ema and Timon but lots of us thought it was the best meal in the whole camp. For dessert we even got ice cream.

In the evening we had a serious clicking competition. It turns out Zeina can has super fast clicking speed (almost too fast for her laptop), so she won it; until Timon had the idea connecting another mouse to click with both fingers, but that’s of course cheating.

Then we played some intense games of One Night Werewolf where we also explored every kind of background music. (Pro tip: if Bibin is in the game and you are the Tanner, you have a 99% chance of winning) It was really fun! We then decided to play some more rounds of Ligretto, which were significantly slower than the rounds before, since we were slowly getting tired. Finally we went to bed soon after.

We started the day at 7:30 like we always do. After a fulfilling and pleasant meal of cereal and bread, everyone got to work and asked their final questions concerning the tasks and the first round. Before lunch, Ema gave us a summary about the SOI and how it works. She told us about the workshops and the camps and how those could improve our coding skills. We then got to ask questions and got clear answers. After this inspiring moment, we had lunch with ice cream as dessert. Because the ice cream was left outside for too long, it was melted on the inside so we all had to use bowls in order to eat them without making a mess. In the process of grabbing one, one of our fellow participants Sonja dropped a bowl as it shattered across the floor, leaving us all in shock from the sound of broken glass. After this shocking incident, we all got to cleaning. We split up in groups where each one had an adult who would distribute the work to everyone. The kitchen was a terrible mess to clean up: there were many dishes to clean and the workspace was disastrously dirty. After a long moment of hard work, we finally finished cleaning and the difference was drastic compared to the room before it was taken care of. After the whole transformation, we had the possibility to go outside to play. Some were on the swings and some were bringing their luggage outside. As we were leaving at around 14:30, each participant had the chance to bring a bag of leftover products including a deck of cards and SOI stickers. After we got in the train to Nyon, we discussed about how we were going to get home. In the process we took a selfie together to capture this last moment where we would all be together for the last time before heading home. Since the time left for us to take our other train was short, we decided to sprint as soon as we got off the train. But it was sadly too late as we tried to open the doors desperately, as the train was ready to leave. Despite the locked doors, Zeina ran her last race towards the front to tell the driver to let us in, filled with hope. But just before she could make it to the front, the train started to move, leaving her unnoticed. As she walked back to us, tired and deceived from her effort, everyone gathered around to decide which train we could take next. We had to wait for another 20 minutes before the train most of us were taking arrived. When it finally arrived, almost everyone got in with their luggage to go home, leaving one of our dear contestants behind, since she had to take another train. Everyone said their goodbyes and headed home peacefully, satisfied with the incredible camp that they’ve experienced together this week.