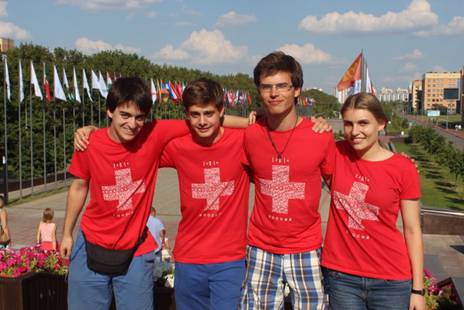 On this page, we will blog about our experience on site from time to time.

It’s worth checking back daily! 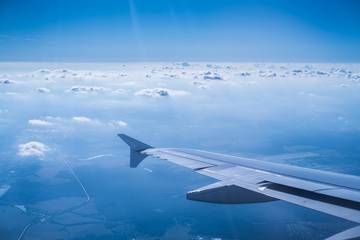 As we left the plane in Moscow in the late afternoon, Victor, our taxi driver, greeted us in sunny 30ºC. The ride from the airport Domodedovo to our apartment in the center of Moscow took about one hour. On the way, Victor told us how the end of the Soviet union still affects people in Moscow today and gave us some good hints on what to do during our time here. The handover of the apartment was exclusively in Russian, but with the united Russian skills of Pascal and Daniel, we also managed that successfully. Once we settled in, it was quite late already and so went across the street for our first Russian dinner. After a nice meal, we played some cards and went to bed early. 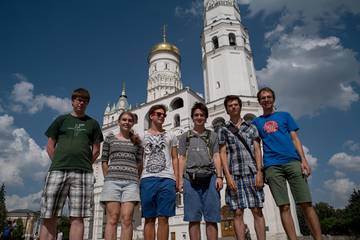 The Swiss team inside the Moscow kremlin.

On our first day in Moscow, we visited the famous Kremlin. Behind the tall red walls, there was much to see. Hundreds of cannons captured from Napoleon, one huge canon of the Tsars and numerous churches with huge iconostasis and paintings on the walls. After a pause playing cards before the kremlin palace and lunch in the Alexander Garden, we escaped the heat over the Moskwa to the Repinskity park. In the evening we strolled along the Moskwa, passing a gigantic monument to Peter the great, the Tretyakov Gallery and the Gork Park. There we ate some Pelmeni, Krim Cake, and other Russian delicacies. Then we played some frisbee on the way home.

The Arbat is one of the most famous streets in Russia because many artists used to live here during the 19th century. We visited some souvenir shops, looked the old buildings and came across many caricaturists on this street. In the afternoon we passed again the Red Square before we moved in the direction of the Moscow State University. The University is located on a hill outside the city center where we had a beautiful view of the side during the sunset. The university herself is one of the seven sisters which were built in Moscow by order of Stalin. 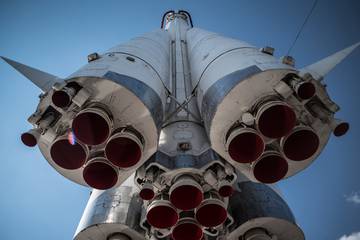 Soviet rocket on the exhibition area VDNH in Moscow

On Tuesday morning we took the Metro to go to the Memorial Museum of Cosmonautics. There we marveled at the soviet pioneer work in spacecraft and were able to look at a replica in life-size of a Russian rocket. On the exhibition area VDNH, the “soviet Versailles”, we spent the afternoon playing the card game Mao, playing Frisbee and discovering a robotics museum. Between dancing, speaking and boxing robots we experimented with virtual reality glasses. Towards evening we visited again the Red Square and tried some typical Russian dishes like Hering under für coat in the GUM, right next to the Red Square. 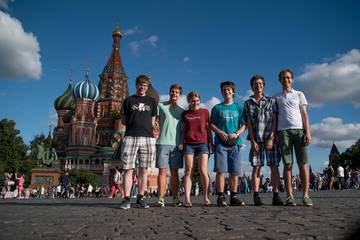 The Swiss IOI-Team on the Red Square in Moscow

On Wednesday we traveled from Moscow to Kazan, the capital of Tatarstan and the scene of the IOI this year. To see a bit more of Kazan we arrived a few days before the opening ceremony and we were one of the first teams to arrive. Afterwards, we went to our hotel and explored Kazan by ourselves. This way we were able to see the Qol Şärif Mosque during sunset.

After we slept in in the morning we went exploring Kazan. At an old monument, erected in honor of the fallen during the siege of Kazan in 1552, we met a few construction workers which were responsible for the renovation of the building. As it turns out they often offer tourists a free guided tour through the monument which we of course accepted. In the monument, we saw a lot of portraits of saints. Later in our walk, we bumped into a swimming restaurant where we stopped to eat lunch. After an enjoyable afternoon in the hotel, we went to a Tartar restaurant to eat dinner. We spent the waiting time watching the other Olympic athletes on television. 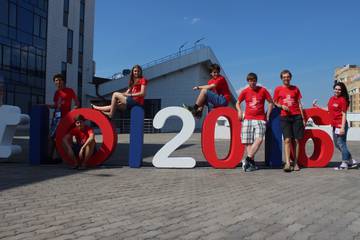 Today we saw the IOI accommodation for the first time and got to know our guide. We also encountered some participants that we already know from the IMO(International Olympiads in Mathematics) or from the Davos Camp. Beside the Frisbee playing, there was also the “Hello Russia” celebration where they showed us some traditional Russian dances.

Today we could inspect the contest room and solve the practice contest. To our horror, we realised that we were not allowed to bring any food to the contest. In the afternoon the opening ceremony took place during which we were unusually well behaved and we didn’t even play cards. In the evening we were quarantined and all communication to the outside was forbidden. So we played with played cards with the Austrian and went to bed early in order to be fit in the morning for the contest. Recordings of the Opening Ceremony 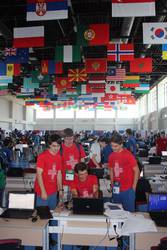 Today was already the first contest day. Armed with some pens and our badges, food and watches were strictly forbidden, we went to the contest room. During 5 hours we tried to solve 3 tasks of different difficulty levels: We succeeded in building an analysable molecule but the task to build an exciting rollercoaster was too difficult for all of us. Also, the planning of a shortcut that is as time-saving as possible on a linear network of roads with more than 400 cities seemed absolutely impossible. The contest took his course without any major issues and we received the result of our submission always withing a few minutes. Although most of us were very tired, there was an excursion planned in the afternoon: First we explored the Kazan Kremlin and in the evening we received a live demonstration of traditional Tatarstan music.

15. August: Exkursion to Kazan and the Sabantui Festival

Between the two contest days, we had a day off to regain some energy. After we visited the old part of the town yesterday, we now focused on the newer part. The excursion took place under the slogan “Sports in Kazan”. First, we made a bus tour through the city center and looked at the sports stadiums that were built for the Olympics in 2013. Afterwards, we had the possibility to get some exercise ourselves along the promenade of the river Kazanka. With different means of locomotion such as Rollerblades, bikes, and pedal cars we raced with different nations. In the afternoon they organized a replica of the Sabantuy, a Tatar summer festival and a national holiday. We were encouraged to try different traditional Tatar sports such as sack races or the catching of fishes with one’s bare hands. In the evening we were again quarantined and the leaders were tasked to translate the tasks until deep into the night.

After we were able to relax a bit yesterday, we were ready to take on the second contest day. Today we had to solve a puzzle with some given hits, to debug a buggy Bitset and to help aliens to take photographs of all points of interest as efficiently as possible. We experienced the tasks as easier as the previous day the only really hard task was the last subtask of the Alien-Task for which one had to magically reduce a 2-dimensional dynamic programme to one dimension. After the contest we ate lunch and already received the results from our leaders: Stefanie Zbinden won a silver medal and Daniel Peter Rutschmann even got a gold medal, what no other Swiss achieved before him at the IOI. After we rested in the afternoon we decided to celebrate our medals by eating in a fine restaurant.

17. August: Excursion to Sviyazhsk and Innopolis

After our successful second contest day, we were now able to totally relaxed enjoy the second excursion day. In the morning we went to Sviyazhsk, in island city approximately 30k from Kazan away. Sviyazhsk was founded in 1551 as a fortress, which was built within four weeks from parts made in Uglich and transported down the Volga in order to mount his attack on Kazan. In the afternoon we visited the university of Innopolis. Except the university, there aren’t many buildings in Innopolis. The city, planned on the drawing board, was built approximately 4 years ago and is placed in a special economic zone to become a metropole for informatics one day. We listened to a presentation and visited an exhibition about robotics. 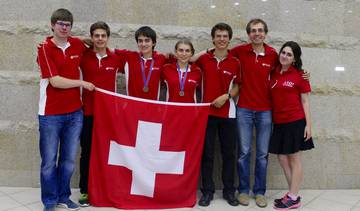 The morning of the last day of IOI was very quiet. The leaders discussed in a long meeting how the IOI should evolve in the future and the contestants played cards with the Australian team on their room. In the afternoon, we went to the glorious closing ceremony in the glass ‘pyramid’ in the city centre. The closing ceremony was full of music, dance, beat boxing, speeches and of course the roughly 150 medals. Stefanie Zbinden received her silver medal, Daniel Rutschmann his gold medal and the IOI flag was passed on to the Iranian delegation that will host IOI 2017 in Teheran. With a big golden glitter rain the IOI 2016 was officially closed. 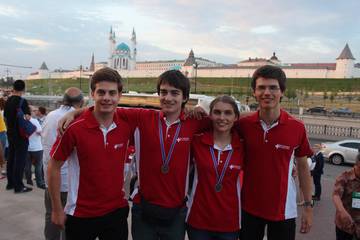 Video of the opening and closing ceremony

After that, we took pictures with the teams from all over the world and had a great conclusion dinner. We celebrated and discussed far into the night before we embarked on our trip back home to Zurich in the morning. In Zurich, we were even greeted by a big welcome with cow bells and a nice apéro. Thanks a lot!