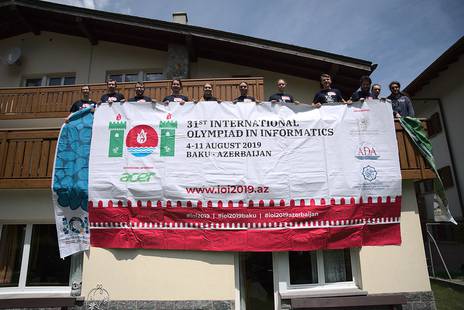 After breakfast we packed some sandwiches and left for a hike. We took the cable car from Saas Grund to Kreuzboden and started walking. After a few minutes we saw a Marmot. A while later one of the Italian contestants had a broken shoe. After temporarily fixing it with a shoelace we noticed that some people were missing. We called them and found out they had turned around and gone back without informing us. After some more walking the second shoe of the Italian participant broke as well. While he was fixing it and Joël was talking to Johannes to discuss how to continue and where to meet those from the group that had returned who still wanted to continue Timon Gehr started eating his sandwiches. Shortly before he was done Joël announced we were going to eat at a restaurant that was just a few minutes away. Next to the restaurant we found a bench which was in a pond and looked very unstable. Of course we had to try to sit on it. Turns out it can hold at least two people despite the way it looks. After lunch we went down to Saas-Almagell and split up. Joël and some of the people who had turned around continued their trip. The others took the bus home. Some of us hadn’t received our guest cards and I also forgot my GA so we had to buy tickets which was a challenge as you could only pay in cash. The group that went on the second hike came home a few hours after the others, drenched from the heavy rain.

Today was the day some of us have been for, the first of the 2 contest day. My alarm rang at around 07:56, as I had to make sure my VM was running at 08:00. After going downstairs and starting my VM, I decided to go back to bed. A bit later, I decided that it’s finally time to get up, drink a smoothie and get myself ready for the contest, which was scheduled to start at 12:00. While drinking my smoothie, I discussed with an italian participant about pre-contest routines. I don’t really have anything special I do before contests, except for playing my guitar, as I think music helps to calm down.

And suddenly it was 12:00 and I found myself sitting in front of the tasks. We helped Aunty Kong distributing some candies, Timothy the architect calculating some things about his new escape game and Timothy again designing some roads and benches in a fountain park. I can’t really decide whether I like the first or the last one the most from this day. It turned out that the day was a hard day compared to other IOIs and that the bronze cut was around 60 points. I on my part was happy to find out that I was still in gold, even after not getting 30 more points in the second task due to some bug, even though I found the theoretical solution to this subtask.

In the evening, we were relieved that we managed to survive the first contest day and spent the evening playing games.

As it was the day after the first contest day, we all were very tired. So because of that we all slept very long. When most of the participants decided that they slept long enough, we decided to go on a tobbogan run (Rodelbahn) in Saas-Fee. After lunch and when everyone was awake, we took the bus to go there (way too late). When we arrived we walked the exausting 10 minutes to the tobbogan. There we wanted to buy the tickets but they didn’t let us as it had started raining in the meantime. It didn’t stop raining so Johannes suggested us playing a game at which we all sucked. When it finally stopped raining we could get our tickets. The tobbogan was very fun, but the game at which everyone sucked was, of course, way funnier. When we got back, we prepared dinner and played some board games after.

As it was the day before the second contest day, we all wanted to be fit for the contest. So because of that we all slept very long. When most of the participants decided that they slept long enought, we decided that we shouldn’t do anything too exausting. The best thing we came up with was some Tichu. That’s number two on the list with the most important things at SOI just after Ovomaltine. Somehow the day went by really quickly so we started making Pasta by mixing sugar, butter and flour. We ended up with some non-Italy-compatible pasta and a delicious apple pie. As mentioned we wanted to be fit for the contest the next day, so everyone went to bed early.

And then came Friday, also known as Contest Day 2. My alarm rang at around 07:56. The same thing over again. The morning felt weird for me, partly because I had to make sure I don’t pressure myself too much. I again took my guitar and played outside a bit to calm myself down.

As I found myself sitting in front of the task again, I didn’t even have the time to think about why it was already 12:00 and whether I was completely lost in time, as I realized that one hour of the contest was already gone and it was in fact already 13:00. I got points somewhat quickly, as the first task of the day, checking for some mutations in a DNA turned out to be a quite easy task which most of the contestants solved. The other tasks were harder though. I decided to try to get all the substasks which were possible to solve in the second task, where we had to help testing Roberts new compputer game. The third and last task though turned out to be my nemesis: We had to design a program that created a program for Christophers new processor. The task was all about bit tricks and computation with simple binary operations. I felt my concentration evaporating, which led to the decision to just try to solve the subtasks worth 58 points. However, after all my submissions giving me 0 points, I started fearing that I might not get any points at all. 20 minutes before the end, I decided to try to secure the subtasks for 21 points. These points turned out to be crucial in the end.

However, thinking I failed my goal, I was sad and angry. I then went to my room, only for Johannes, Josia and some Italians coming upstairs telling me that the rankings were out. I was kind of suspicious seeing them following me downstairs with cameras. But I didn’t want to believe it until I saw it with my own eyes and I think happy might be quite an understatement for how I felt.

Josia on the other hand was less lucky. I’m still sad for him. It was a joy seeing him progressing and what a good performance he had, only to miss the bronze medal by three points in the end. But as he still has some time left, I’m confident that he can learn a lot from this experience.

The rest of the evening, we were just happy that the contest was over and we found ourselves trying to connect four keyboards to Alberts Computer, watching Johannes throw food into the river (only virtually though) and generating grader gifs.

Early in the morning Timon was contacted by Stefanie asking whether we’d still be at the house at around noon and she should come visit us. Given that many of us went to sleep late the night before he said yes and Stefanie left her place just a few minutes after waking up. By the time she arrived we had picked an easy short hike and a longer one. The Italian team decided to go to a restaurant instead of the hike to celebrate their results before one of their leaders had to leave. Because most of the Swiss wanted to go on the longer hike and the Italians weren’t coming we all decided to do the longer one. It started with a 25 min bus ride to Stalden followed by a similarly long wait for the next cable car to Gspon. Stefanie, Timon, Alberts, and I decided to use the break to start a game of tichu while some of the others already ate part of their food. Shortly after we got to the top and started walking most of the tichu group started getting behind so we decided to split up after a quick photo break and only do a part of the hike with lots of tichu breaks. At some point it started raining a bit so we finished the round of tichu we had started and decided to walk a bit faster. Once the rain stopped we made another tichu break and discussed the speed at which our biscuits were eaten. At the end of that break we noticed it was getting late so we wanted to go down faster in order to be in time for the bus that was scheduled to leave in 30 minutes. We managed to take the wrong path and I injured my ankle so we decided we didn’t want to walk too fast and instead called Fabian to come pick us up as we wouldn’t reach the bus and the next one was scheduled an hour later. After some more wrong paths, weak rain showers, and one more ankle injury we finally reached our destination but Fabian was nowhere to be found. Somehow Alberts’ phone’s location was not very accurate when he sent it and Fabian had gone to another village. Of course we passed our waiting time with some more tichu. We arrived at the house about 2h later than the group that had taken the longer hike. We ate some Schnitzel with fries and had a long discussion about EGOI, women in informatics competitions, inclusive language and clothing for construction workers, which made some of us go to bed much later than planned (and neglect some french books that needed to be read).