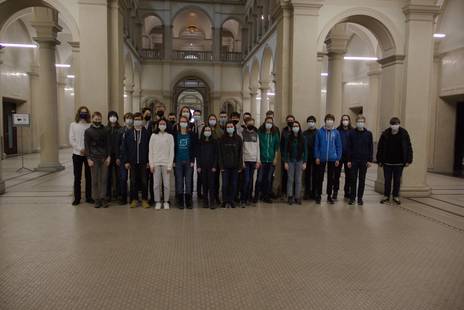 194 participants took up the challenge and competed in the first round of the Swiss Olympiad in Informatics. From September 15 to November 30, 2021, they had time to solve tricky programming tasks online.

Participants from Nidwalden, Basel-Stadt and Zurich win the first round 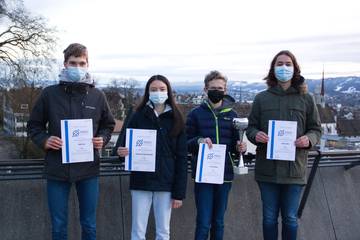 The winners of the first round 2021/2022: Yaël Arn, Vivienne Burckhardt, Elias Bauer and Josia John

The three best participants of the first round were honored with prizes on the day of the Computer Science Olympiad. They are: Elias Bauer (Kollegium St. Fidelis, Nidwalden), Vivienne Burckhardt (MNG Rämibühl, Zurich) and Josia John (Kantonsschule im Lee, Zurich).

With the only full solution for the task “Clawsort” and a perfect score of 500/500 Yaël Arn (Gymnasium Bäumlihof, Basel-Stadt) won the junior round, ahead of Elias Bauer and Vivienne Burckhardt, both of whom alread won a prize in the regular round.

To the full ranking of the Junior Round

On the SOI day, participants learned what it takes to organize an EGOI, but also how to imagine international events at the time of the pandemic from the participants’ point of view.

Solutions to the tasks were presented and it sometimes happened that participants found solutions in the course of the first round that were more elegant than those originally planned. This was the case with Dancing Mice, where the task was to make mice dance in a circle.

Prof. Dr. Patrick Jenny talked about how algorithms and data structures can be used to simulate all sorts of useful and exciting things with computer simulations.

For those who could only attend online, the event was live-streamed. Unfortunately, there was a mistake during the recording of the live stream, so unfortunately we can’t provide a recording of it.

Instead, we have a compilation of the slides for anyone who is interested:

The race to the IOI in Indonesia

We continue with our olympiad in February: 24 selected participants will train at the Sarnen camp from February 12 to 19, 2022. This will be followed by the second round with a theoretical and a practical exam at the beginning of March from home. The best twelve participants will then make it to the final round, where the four most successful participants can qualify for the International Olympiad in Informatics in Indonesia (7 – 14 August 2022).