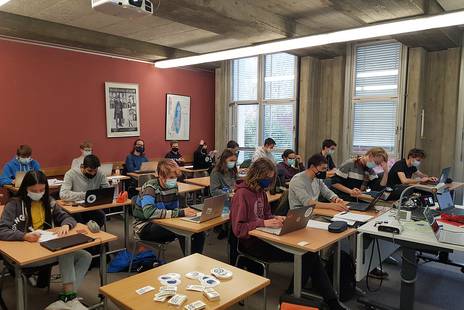 This year, we again organized autumn introductory workshops to give beginners the opportunity to get to know the Swiss Olympiad in Informatics and get a head start in programming and algorithmic design, in order to help them to perform in this year’s competition. Every participant took part in two weekend-long workshops about programming in C++ and algorithms. In a third part, which took place online at one afternoon, the participants had the opportunity to further deepen their knowledge. In total, everyone spent more than four days learning new things, scratching their heads about tricky problems and having fun together with other like-minded participants.

The different workshops took place in the University of Bern, ETH Zürich, EPF Lausanne and online. Like in previous years, we offered participants the opportunity to follow workshops entirely in German, English or in French.

During the first week-end, participants spent two days learning to program in C++, determine the asymptotic runtime of programs and solve scanline tasks. In between lectures, participants were given a lot of time to practice with their newly acquired skills and to try their hands on some first algorithmic problems.

In the second workshop, the participants learned about graph theory and the most fundamental algorithms on graphs. At Sunday we covered Dynamic Programming. Considering that some had little previous experience in programming, it was impressive to see participants already being able to solve some advanced problems, sometimes with the help of their teachers or of other fellow participants. And indeed, this year, there was a special focus on collaboration and learning together: for example, a big part of the first weekend was dedicated to the analysis of algorithms in groups of a handful of participants. Everyone discussed the given programs together, had to compute their runtime and make proofs of their solutions together.

Like in the previous year, there was again the option to participate at the workshop online as well. Where in the previous year we still had to get familiar with this new format, this year we were well practiced teaching online. Instead of asking the student sitting next to you for help, the participants formed small groups of which each met in a voice chat. Instead of a shared lunch break, we had a game break.

For the first time, we had a third part of the workshops, which took place exclusively online. The participants learned about Binary Search and it’s applications and also had the chance to fill some gaps about C++. For some participants we offered the option again to visit the introduction to graphs.

If you missed out on the workshop, you can catch up by reading some of our teaching materials collected here:

There, you can find all our videos, handouts as well as all our tasks on our grading system. The next introductory workshops will take place in October 2022.

And finally, here are some pictures from the workshops on our Flickr album.