Graphs are of importance in a lot of tasks in informatics, and have practical applications in diverse fields. We use the term ‘graph’ to talk about networks of points and connections between them, for example a road layout of a city. The points in this case represent the crossroads and squares of the city, and the connections stand for the roads between them.

In graph theory we usually care about properties such as the shortest distance between two points (What’s the shortest path to the train station?) or if it’s at all possible to go from every place to every other place (Is there an island from which no roads connect to the main land?).

Sometimes we are given additional information about the points and connections, for example the expected time spent driving along a road (we’ll later call this the weight of a connection), or a direction for a connection (think one way road). For now, we’ll just care about undirected, unweighted graphs.

What is a graph?

A graph denotes a set of points and connections between those points. A point is usually called a node or vertex, and for a connection, we use the term edge. In figure 1, you can see an example for a graph. Every circle is a node and the lines are the edges, each connecting two such nodes. 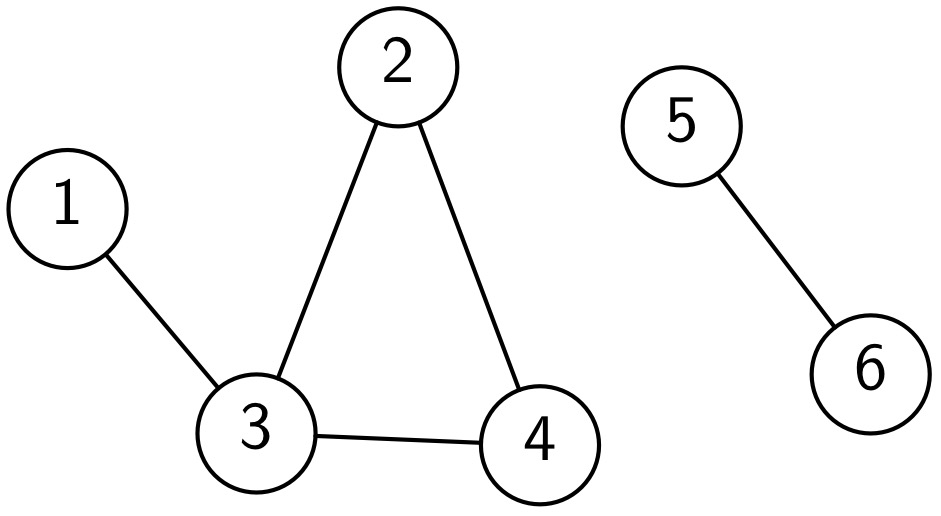 Figure 1: An example for a graph with 6 nodes and 5 edges.

We usually don’t care about the exact arrangement and style in which a graph is drawn. Two drawings represent the same graph, as long as they have the same nodes and the same pairs of nodes are connected. We can therefore move nodes of a graph around, and as long as we don’t change any of the connections, we still have the same graph as before. Further, it doesn’t even have to be a drawing, we can talk about a graph by just listing its nodes and edges.

How do we store a graph on a computer?

When we need to store a graph for some task, we usually don’t receive it as an image, but rather as an abstract list of nodes and edges.

The nodes are usually numbered from \(1\) to \(n\). The input usually starts with the numbers \(n\) and \(m\), followed by \(m\) lines with the pairs of points representing the edges. For the graph in figure 1, an input could look like this:

What to do with this? How do we store this graph in our program, such that we can do useful things with it?

In a typical SOI task, we are often given around \(100,000\) edges, so we can’t just throw them in a big list and iterate over all of them for every query. A useful technique to store a graph is a so-called adjacency list. The idea is simple: we store for every node a separate list of all of its neighbours. This datastructure consists of \(n\) lists, and if we want to get the neighbourhood of the \(x\)-th node, we just look at the \(x\)-th list. The lists for the above example would look like this:

This can easily be implemented in C++ using vectors (arrays of dynamic size, not connected to the vectors you know from maths). We then pack \(n\) vectors in one big vector - the inner vectors store the lists of neighbours, and the outer list is there to hold the inner lists. We have to be careful about the indexing however. Either we convert everything to zero-based indexing (which is often easier), or we add an additional node \(0\) without any neighbours.

The rest of this chapter is concerned with the exact mathematical observation of graphs and their properties.

Mathematical description of a graph

As mentioned above, when described mathematically, a graph consists of two sets: The set of nodes \(V\), and the set of edges \(E\). Every edge is then represented by a pair of nodes, the nodes that are connected by this edge.

As an example, we use this graph:

Two important terms are adjacency and incidence. We call two nodes adjacent, if there is an edge between them. A node and an edge are incident, if the edge is connected to this node.

This is a more general type of graph, which can also contain loops (edges from a node to itself) and multi-edges (multiple edges between the same pair of nodes).

A graph that doesn’t contain loops and multi-edges is a simple graph. As long as not explicitly stated otherwise, we’ll assume the graphs in this script to be simple graphs.

Degree of a node

In this example, a path of length 2 is highlighted:

A graph is connected, if there is a path between all pairs of nodes. This term should get clearer across the next section of the script.

Intuitively, this term is quite simple: The above graph only consists of one component, while the following graph contains three:

(Note, that this diagram doesn’t show three graphs, but rather a single graph made up of three components.)

A graph can be separated into its components, without splitting an edge.

From this follows, that a graph is connected if and only if it contains only a single component.

A cycle is similar to a path, with the only difference that the start and end node are the same. A cycle of length 4 is highlighted in this graph:

A graph that contains at least one cycle is a cyclic graph. Analogously, a graph that doesn’t contain any cycles is called acyclic.

Edges in a weighted graph have a number associated to them, called the weight of the edge. This can be used to describe for example the length of a road or the bandwidth of a network connection.

As a concrete example, the simplified tram network of Zurich with the corresponding travel times in minutes: 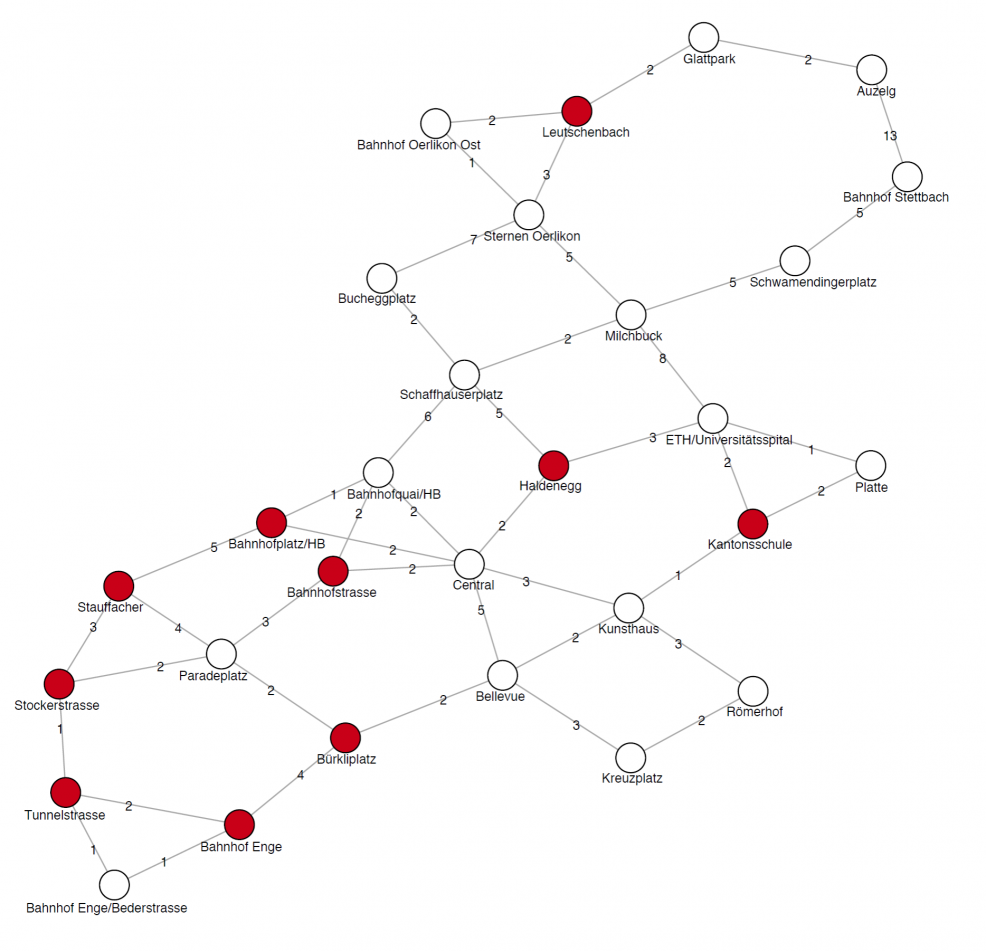 A special kind of graph you will often come across is a tree. A tree is an acyclic, connected graph.

A node with degree 1 (there is exactly one edge away from it) in a tree is called leaf.

Often, a node of the tree will be labelled as the root. This is in a way the “main node”, from which all other nodes descend. Unlike a biological tree, in informatics we usually draw a tree with the root on top: 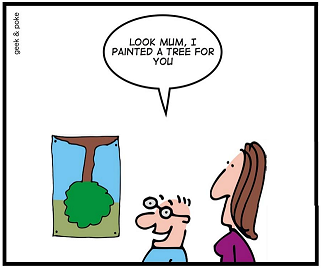 Note, that the root can be a leaf as well.

A typical example for a tree is the file system of a computer. The root of the tree then represents the adequately named “root-directory”, and the files (or empty folders) are leaves. All the other nodes are non-empty directories.

An important property is the fact, that \(|E| = |V| - 1\) holds for every tree, i.e. number of edges = number of nodes - 1. The reason for this can easily be figured out by imagining a tree with the root on top. Then every node has exactly one edge directly above it, except for the root.

With a given amount of nodes, there is exactly one complete graph: it is defined as having an edge between every pair of edges, it therefore has the largest possible amount of edges. As you can easily verify, the degree of every node in a complete graph is \(n - 1\). 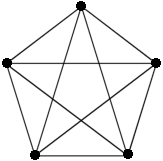 A bipartite graph is one, in which the nodes can be separated into two sets, such that no edge runs between two nodes in the same set (all edges connect a node from one set to a node from the other set). The following graph is bipartite:

We already mentioned the most common way to store graphs, the adjacency list. There is however also a different way to store a graph, which is usually slower, but might actually be faster in some cases:

Unlike an adjacency list, for the adjacency matrix we don’t have a list of all nodes, but rather a matrix or table with \(n\) rows and columns. Each row/column represents a node.

In the simplest case, every field in this table just has a boolean value (“true” or “false”), that tells us if the node of this row is connected to the node of this column. If node \(i\) is connected to node \(j\), then node \(j\) is also connected to node \(i\). This means, that there are always two booleans per edge that turn true in the matrix. The matrix is symmetric across the diagonal (note that this is only true for undirected graphs, we’ll explore this term later). The code can often be simplified, if we just consider the part of the matrix above or below the diagonal. Then we don’t have to write two bools every time we store an edge.

To store a weighted graph, we can replace the boolean in the adjacency matrix by an integer. But then we need a special value, e.g. -1, that means that these two nodes are not connected.

Changing the implementation of an adjacency list to accomodate weighted graph, however, gets a bit tricky: Here, we have to replace every integer, that points to another node, by a pair. Then the first value in the pair denotes the node to which the edge leads, and the second value stores the weight of the edge.

Some additional notes to this table: * If no other limits are given in the task description, we have \(E \in \mathcal O(V^2)\). If we are dealing with a dense graph (i.e. close to a complete graph), the performance of the two methods is almost the same. * In most SOI tasks, we don’t have to worry about dense graphs, and in this case, the adjacency list is usually the better choice. * A case in which it is more efficient to use an adjacency matrix is when the big memory requirement is not a problem and we frequently have to check for the existence of an edge between two nodes.

A graph can be directed, which means that every edge has a direction associated with it. The edges are then usually drawn as arrows. Directed graphs are usually called digraphs for short.

On a path from \(A\) to \(B\), every edge has to be oriented in the direction of the path now. Also, we can now have two edges between a pair of nodes, as long as they don’t point in the same direction.

Similary to how paths now have an additional requirement, the same applies to cycles. If we assign a direction to every edge in a cyclic, undirected graph, the resulting graph is not neccessarily cyclic. The following graph is not cyclic, because if the edges were to represent one-way roads, you couldn’t drive in a cycle.

The implementation is quite intuitive. For the adjacency list, we only add an entry to the list for node \(a\) pointing to the node \(b\), if there is an edge going from \(a\) to \(b\). The adjacency matrix is no longer symmetric accross the diagonal. We now have to decide if the first index of the array access represents the “from” or “to” node. If we go for the former, the code could look like this:

The terms source and sink will be important for the topological sorting of a graph. The source is a node with in-degree zero, the sink has out-degree zero.

A subclass of digraphs are acyclic digraphs, DAG for short. All DAGs have at least one source and one sink. This can be seen by starting at an arbitrary node, then following an edge going away from the current node repeatedly. We’ll never visit the same node twice, because the graph is acyclic. We therefore know that we’ll eventually end up at a node with out-degree zero, a sink, because the graph is finite. You can follow the reverse process to see that the DAG will always have a source.

It’s useful to have read the following statements about graphs at some point. You shouldn’t however try to memorize them, since either they make sense intuitively after having worked with graphs for a while, or you’ll rarely need them.