In this article we will have a look at prefix sums. We will start with the one dimensional case and expand later to two dimensions. This trick is easy to use but can be used as a powerful building block for many problems.

What kind of problems can be solved with a prefix sum? We are given a table of numbers and we have to calculate the sum in a part of the table very often. Or in other words: Given an \(M\times N\) rectangle with numbers. Calculate the sum of all numbers for \(Q\) different subrectangles.

Let’s first have a look at the one dimensional case where we have a list with \(N\) numbers. The first approach is to sum up all numbers for the queried range. Something similar to this:

This is too slow if we have many queries because each of the \(Q\) queries takes up to \(N\) operations. The algorithm runs in \(\mathcal{O}(N\cdot Q)\)

The trick is do more work at the beginning and precalculate some values. With those additional informations we can answer the queries faster. Instead of summing up all numbers in \(\mathcal{O}(N)\) for each query we can then calculate it in \(\mathcal{O}(1)\). Let’s find out how this works. 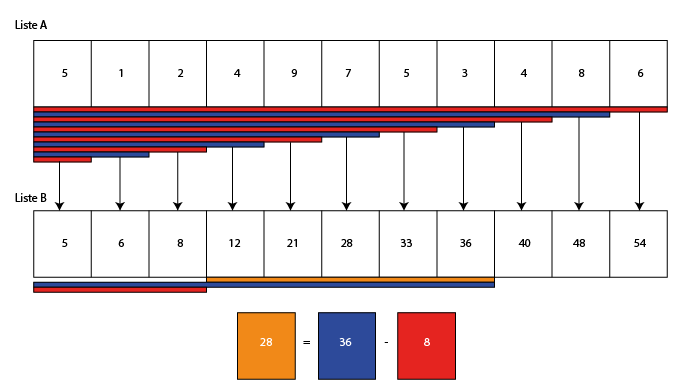 We can extend this trick to two dimensions.

Let \(A\) be the given rectangle and \(B\) the precalculated rectangle. Which values do we need in \(B\) to be able to calculate the sum of subrectangles efficiently? As we can see in the image above the yellow rectangle can be calculated with the four other rectangles (they represent the sum of the covered fields). Those four rectangles have their upper left corner in the upper left corner of \(A\). This is exactly the same as in the one dimensioal case where all ranges touched the left end.

In \(B\) we calculate in each field the sum of the subrectangle from the upper left corner to the current field. This can be done efficiently with several approaches. One possibility is to walk through the rectangle row by row from left to right and set \(b_{y,x} = b_{y-1,x} + b_{y,x-1} - b_{y-1,x-1} + a_{y-1,x-1}\). The subtraction is necessary as we would count this subrectangle twice otherwise.

The algorithm can be implemented as follows:

To wrap things up let’s look at a task we can solve with prefix sums.

To come up with a better weather forecast temperatures are measured on a regular basis. A grid will be placed on top of the map and in each field the temperature at this location is noted. To produce the forecast average temperatures of many different, rectangular subregions are needed.

We could for each query sum up all values in the region and divide by the number of fields. But we just learned a better approach: we calculate the prefix sums and can answer each query in constant time (i.e. it does not matter how large the region or the whole map is).

Often prefix sums are hidden a bit and they are only a building block for the complete solution. Therefore it is very helpful to keep them in mind while solving tasks.