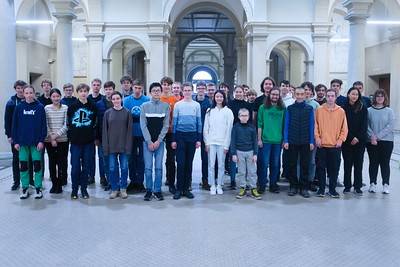 139 participants have taken up the challenge and participated in the 2023 Olympiad in Informatics. From September 15 to November 30, 2022, they had time to solve tricky programming tasks online.

Participants from Basel-Stadt, Nidwalden and Bern win the first round 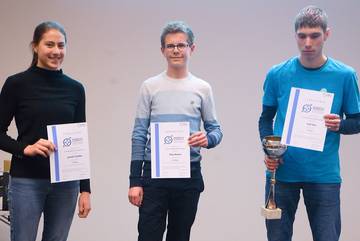 The winners of the first round in 2022/2023: Jasmin Studer, Elias Bauer and Yaël Arn

The three best participants of the first round were honored with prizes on the day of the Computer Science Olympiad. They are: Yaël Arn (Gymnasium Bäumlihof, Basel-Stadt), Elias Bauer (Kollegium St. Fidelis, Nidwalden), and Jasmin Studer (Gymnasium Lerbermatt, Bern).

Yaël won the junior round last year. The fact that he was able to repeat his success this year in the regular round shows that the introduction of the Junior Round three years ago was a big success. The only task in which Yaël did not achieve the full score is the creativity task, where there is no optimal solution but the algorithms of the participants compete against each other in a tournament. 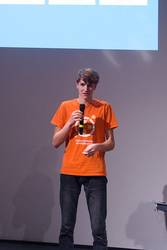 Linus Lüchinger, the winner of the creativity tournament

This year, the goal of the creativity task was to get as many points as possible by planting trees on the nodes of a graph. Taking strategically important nodes early on was particularly important, as was weighing up at what point in time one should aim for nodes that give new seedlings or nodes that give points, as Linus Lüchinger (Kantonsschule am Burggraben, St Gallen), the winner of the creativity tournament, explains.

Strong results also in the junior round 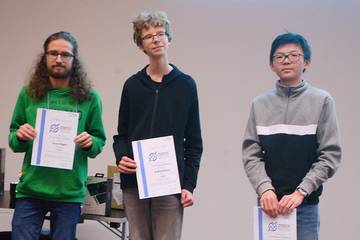 The winners of the junior round in 2022/2023: Ursus Wigger, Andrej Ševera and Jovian Soejono

The junior round is for participants who are still in school for at least two more years and can therefore still participate in the SOI many more times. This year, the participants had to calculate, among other things, how far one can fly in the Hungarian mountains with a paraglider.

With only five missing points, Ursus Wigger (Alte Kantonsschule Aarau, Argau) took first place, ahead of Andrej Ševera (Collège des Voirets, Geneva) and Jovian Soejono (International School of Geneva, Geneva). We are particularly pleased with the strong performances from the canton of Geneva, as the French-speaking part of Switzerland has been poorly represented at SOI in the past.

Besides the presentation of the results, there were also a lot of other exciting presentations. Solutions to some of the problems were presented and some participants told about their experiences at the International Olympiads last year.

In the morning, Prof. Dr. Dennis Komm from ETH gave a talk on complexity theory including the traveling salesperson problem, where the goal is to visit all cities on a map exactly once at the lowest possible cost.

In the afternoon there was a presentation of our umbrella organization, the Science Olympiad, and Julia Badertscher from Eraneos gave exciting tips on how to deal with personal data on the Internet. The information received was intensively discussed at the subsequent apéro.

The goal in sight: The IOI in Hungary

The competition continues for the computer science fans as early as February: 24 selected participants will train at the Sarnen camp from February 11 – 18, 2023. This is followed by the second round with a theoretical exam at ETH Zurich or EPFL Lausanne at the beginning of March and a practical exam one week later from home. The best 15 participants then make it to the final round, where the four most successful youngsters can qualify for the International Olympiad in Informatics in Hungary (28 August – 4 September 2023).